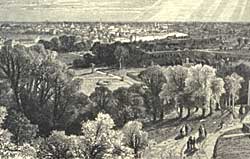 Trees have been vital to Rochester since the city’s founding. It was a practically impenetrable forest when the first settlers arrived. The density of trees made the trip from Stone-Tolan House, now 2370 East Avenue, to the Genesee Falls a difficult, full-day’s journey, even utilizing Seneca Indian trails. Today, that four-mile distance can be traversed by car in 10 minutes. Trees then were so plentiful that early settlers built roads from them. Plank Road, though smoothly paved today, bears the name of its original composition. Another wooden highway was what became East Henrietta Road today.  It was the forest of trees that saved Rochester from total destruction by the British in the War of 1812. The small village of Buffalo, vulnerably located on the flat, sandy shores of Lake Erie, was pillaged and burned to the ground on December 30 and 31, 1813. Lewiston was similarly brutally attacked and burned. On May 14, 1814, the British fleet -consisting of eight large ships, several smaller ones, gunboats, and barges -anchored at Lake Ontario off the mouth of the Genesee River.  At the time, Rochesterville was a log-cabin village of 300 people. With help from a few neighboring villages, Rochesterville mustered 33 men, 20 horses, and one cannon and took the whole night to move its meager assemblage to the area that is now Charlotte. The next day was very foggy, and except for a few shared cannon shots, it was basically a standoff between the British and Americans.

Reinforcements for the Americans arrived on the second day, but they were woefully inadequate to the British might, so the Americans decided to trick the British on their numbers by marching in circles in and out of the woods, with files of men passing visibly a number of times through a clearing. The British, not knowing how many troops they faced if they were to land, decided the gains were not worth the battle, and on the third day they sailed on to the east. The forest had saved Rochester.

Charles Sprague Sargent, the first director of Harvard University’s Arnold Arboretum, called Rochester “a city in a forest.” It is an apt description because the area was originally a forest of red, black, and white oaks; chestnuts; hickories; black walnuts; beeches; red and sugar maples; basswoods; tulip trees, and white ashes. Settlers gathered butternuts for food from trees that grew along the river.  When the first sawmills were established at the falls on the Genesee River, finished lumber became available, and the architecture that the settlers remembered from their New England background, sprouted here. One of the early settlers, Hamlet Scrantom, wrote in 1812, “The country is very pleasant and fertile, timbered with oak, chestnut, hickory, black walnut, and white wood, some of enormous size. I saw one white-wood log twelve feet long which produced 1000 feet of clapboards.” 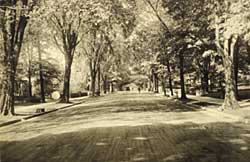 In the 1830s, the prominent flour miller, Hervey Ely, planted sugar maples and other trees along the west side of Washington Street for, he said, “shade and decoration.” They were the first trees in Rochester set out for ornament.

Rochester truly awakened to its horticultural potential in the 1840s. After many trees were cut to clear land for building, replanting occurred to decorate and shade city streets and lawns. The many nurseries that developed here were influential in this effort. Josiah W. Bissell, a nurseryman, was responsible for planting the first street trees on both sides of East Avenue in the mid-1840s. They were horse chestnuts. Some people contend that the horses that were hitched to the trees died from eating the bark of the horse chestnuts. Others maintain that the horse chestnuts died from the horses eating the bark. Perhaps both are true. In any case, the horse chestnuts had to be replaced with elms, which now, too, have been replaced.

Many developers recognized that street trees enhanced the value of residential properties. H. E. Hooker, owner of Hooker Brothers Nursery, and developer of Oxford Street, designed the street in 1880 with a mall on which he planted a hybrid cross between Chinese white and Japanese purple magnolias, which are noted to this day for their delicate color. 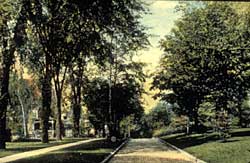 George Ellwanger and Patrick Barry, who built the largest nursery in the world in the middle and late 1800s on 650 acres along Mount Hope Avenue, scoured Europe for fine trees that they could propagate in America. Their efforts can be seen throughout Rochester, particularly in the grand European beeches they developed. These include fern-leaved, copper, purple, and weeping beeches.

At its first organizational meeting on May 7, 1888, the Rochester Parks Commission decided to invite the great American landscape architect, Frederick Law Olmsted, and his partner, Calvin Vaux, to design a park system for the city. Their major efforts included Genesee Valley Park, Highland Park, Maplewood Park, and Seneca Park. Olmsted’s concept was to connect the parks to other areas of the city by means of a parkway system.

In its first annual report, the city’s Parks Commission mentioned street trees and residents’ efforts to plant trees in front of their houses. By 1894, the Common Council empowered the Park Commission to care for existing street trees. 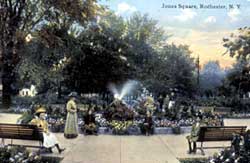 Beginning in 1896, the commission’s annual reports record areas that had street trees pruned. The reports also document an ongoing battle with tussock moths, commonly called tent caterpillars. Work requested by residents each year far exceeded the Park Commission’s ability to accomplish it.  In 1899, the commission began to plant trees along streets. By 1915, the Park Commission was abolished and its duties transferred to the newly organized Department of Parks.

In the early 1900s, the influence of Rochester’s nurseries was apparent in the species selections made by the city or planted by developers and available to residents at “low rates.” The Ellwanger and Barry Nursery noted certain trees in its catalogs as suitable for parks, avenues, and streets. These included a wide variety of maples, elms, and poplars along with select species of linden, larch, horse chestnut, and locust designated as suitable. Not surprisingly, these species are still found on city streets, and some continue to be planted.

In the 1950s, the Forestry Division was mobilized to remove elm trees infected by Dutch elm disease. An inventory was completed that was a progressive management approach for the time. The common practice of planting a single type of tree (monoculture) along a street or park unfortunately created favorable conditions for the spread of Dutch Elm disease in the American elm. An estimated 20,000 American elms along numerous residential streets and grand boulevards in Rochester were lost to the disease over a 15-year period. As a result, subsequent plantings included a diversity of tree species on a street. In the years to come, however, the practice varied depending on decisions of the City Forester. 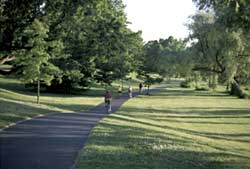 The ice storm of March 1991 had a great impact on Rochester’s urban forest. Approximately 14,000 trees were removed and subsequently replaced over a four-year period. The ice storm shaped the future of Rochester’s urban forest. A tree-planting plan was developed to guide the replanting. Key to the plan was integrating a diversity of tree species along a street to minimize the impact of future events. Planting plans were developed for every street with a selection of trees matching a desired visual image and considering the site characteristics.  Rochester’s verdant environment of indigenous flora, extensive horticultural nurseries, and masterfully designed parks has had a profound effect on the “city in a forest” that we know today. The Forestry Division is committed to continuing this legacy of gracious, tree-lined streets and glorious parks.