When the 7th District Federation Garden Clubs of NYS asked if I would participate in the 35th Candlelight Holiday Tour on November 11,2017, I was honored.  After all it was Veterans Day, I’m a Vet, how perfect! The only request was to have a live tree in place for decorating the week prior to the home tour.  I said no problem.  Oops, big problem.  All my tree sources dried up and I was faced with the daunting task of finding a 12-14 foot tree and have it delivered by November 6th. So down the yellow pages I go, coming up empty.  Then, happily Woody Aces returned my  call and said, “I think we can help you”!  Off I go to meet with Dave, the owner, and with in 5 minutes we find “the” tree.  But just to be sure, we continued touring the rest of the 1100 acres on a 4 wheeler and I had the time of my life. He not only delivered the tree (on that Sunday) but also assisted with set up and trimming. So, with the most perfectly beautiful tree in place, I’m set.  Not so fast.  There was the question of possibly having a working fireplace in time for the home tour. I have lived here 11 years and have never had a working fireplace. It was about time.  So I placed a call to Leroy Hearth and Home, they came, counseled, ordered, delivered and set up in record time, and just in time. What a tremendous difference-for both me and my guests! Hat’s off the Woody Acres, Leroy Hearth and Home, The 7th District Federation Garden Clubs of NYS, and to our supportive community for making this Candlelight tour a resounding success. And now for all to enjoy a grinch-proof Holiday Season at the Ellwanger Estate B&B. 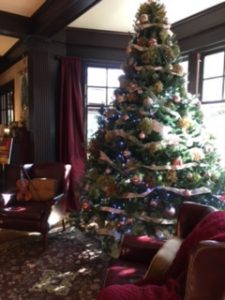 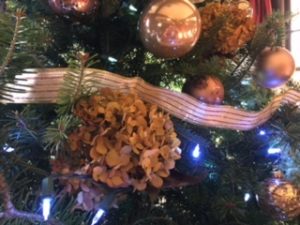 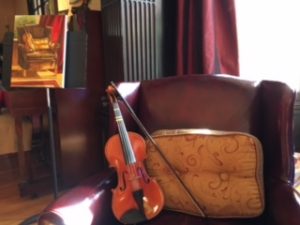 My mother has always been a huge fan of raspberries, but I’ve always found them to be too tart. I had never tasted wineberries before my time at the Ellwanger Estate Bed and Breakfast, but I’ve fallen in love with them. They have the same fresh and sweet flavor of raspberries without the sharp tartness. I would recommend Rosemary’s garden fresh wineberries to anyone. During my time as a hospitality intern at the Ellwanger Estate, we have picked wineberries over the last couple of weeks to create wonderful fruit masterpieces, such as fruit poodles, kiwi roses surrounded by exquisite fruit mosaics and delicious and ornate fruit parfaits. Our guests have been highly impressed by our fresh organic produce, and our dedication to providing a genuine farm to table dining experience. Rosemary introduced me to wineberries, and it has been a wonderful addition to my fruit repertoire. Come and let us delight you with some wineberries at the finale of their season!

With gratitude and high hopes of meeting you! 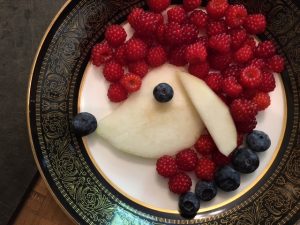 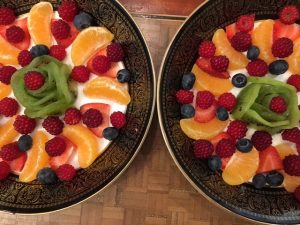 The Ellwanger Estate B&B offers a destination for guests who take an active role in seeking wellness, inspiration and self-improvement for a life in balance.

Wellness has become so top of mind. And this is especially true for the traveler. As the owner of the Ellwanger Estate B&B, as well as a nurse, midwife, preservationist, farmer, and environmentalist, we are paying much more attention to wellness as a lifestyle.

As travelers, you don’t have to give up your healthy habits on the road. We have created room environments conducive to sleep, breakfast offerings and grab and go items that are healthier, and offer everything from Yoga on the lawn, mediation in the Ellwanger Gardens, run/walks on the Genesee Riverway Trail, hiking in Highland Park, to allergy-friendly rooms. Health and wellness is built into the Ellwanger Estate B&B—from in-room air purifiers, PRANA mattresses, to the cleaning products that we use. A good part of wellness is connected to creating comfortable and relaxing spaces that rejuvenate. Lighting, sound, color, the extent to which nature is brought indoors, and ergonomics all come into play. In fact, recharge your Tesla batteries while you are out playing.

The Ellwanger Estate B&B wellness lifestyle is light years ahead of the “Hotel industry”, while adding a novel and superior experience, which is good news for everyone.

This is the time of year when the seasons change from the first green suggestions of spring to the warmer weather and blooming gardens of summer. But here, at the Ellwanger, it is Elopement Season, with brides in delicate white lace gliding down the carved oak staircase, to meet their cherished partners in front of gathered friends and family and promise their undying love for each other.

Sometimes the vows are exchanged in front of the period fireplace of the Great Room; sometimes the couple decides to take their ceremony to the fresh air and garden scents of the generous porch, overlooking the beautiful Ellwanger Garden.

Not all the brides are young, not all the gowns are formal, but all the couples have something in common: a love of romance, an appreciation of vintage surroundings and a deep faith and hope in the future together. 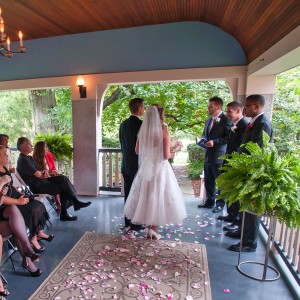 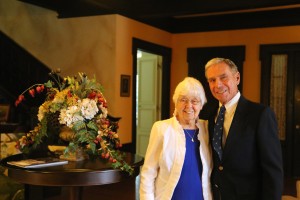 The perfect marriage proposal with the element of surprise!

As a disc jockey, Scotty Brooks is used to playing up the element of surprise.

He perfected it in a marriage proposal for his girlfriend Dianne that can best be described as sketchy.

Brooks, a DJ for 100.5 The Drive in Rochester, had an ingenious idea to propose to Dianne via a caricature artist.

“I was trying to think of something different to do [for a proposal], said Brooks, who has dated Dianne for about three years. “She has a love of pictures and things to hang up on the wall so I asked myself ‘What can I do so she has a physical memory of that day?”

Brooks came up with his caricature idea and then got sneaky.

But, how could he explain to Dianne that a caricature artist would randomly be waiting for them at the gardens when they arrived for a Sunday stroll?

So he told her his radio station was offering free caricatures that day for all Clear Channel Media employees and their families as a promotion. He also told his co-workers his plan so they could play along if she asked them about the caricatures.

Dianne fell for it.

The couple arrived for their “scheduled” sit down with the caricature artist and posed for fifteen minutes as he sketched them — adding a big ring and a “Will you marry me?” bubble.

They were the longest fifteen minutes of Brooks’ life and then, were followed by the longest ten seconds as the artist presented the sketch to them and Dianne looked at it not quite comprehending.

“Are you serious?” she finally asked.

When Brooks answered by getting down on one knee, she knew the answer.

And he already knew hers.

See more photos of the proposal here on Brooks’ blog. The entire process was photographed by the artist’s wife for “promotional purposes.”

Are you Serious? Elopements at the Ellwanger Estate